Home Cats How Do Cats See Us?
Browse by Blog Categories, Recent Articles and more... Can Cats See Us Like We See Ourselves? How Cats See Human Faces

Find out what we know about how cats see us, and how we may actually look through their eyes.

Have you ever looked into your cat’s eyes and wondered what she sees when she looks at you? Cats see humans very differently from the way most humans see themselves. Their view is uniquely feline, and understanding it may help you to understand your cat a little better. 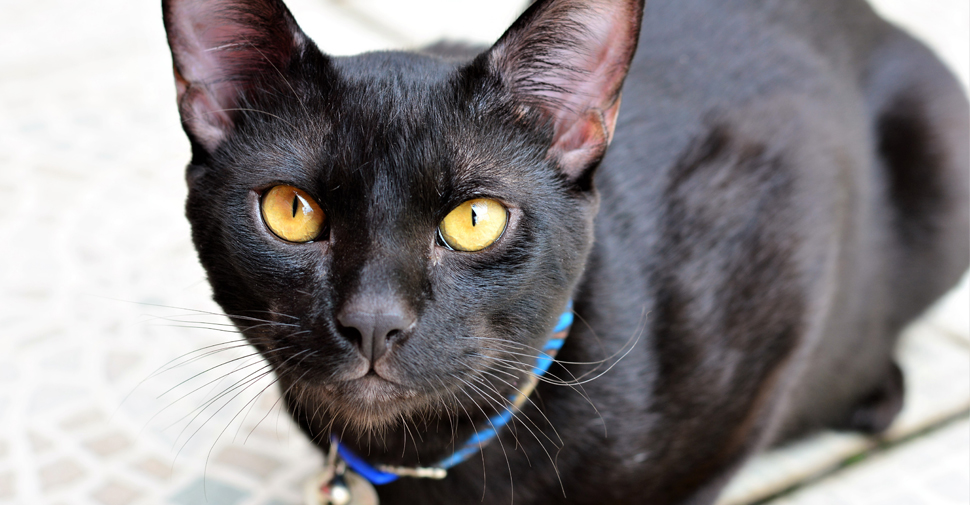 Can Cats See Us in Color?

Technically, cats can see in color, but they probably see us — and everything else — in a very different light than we do. Cats have very few of the cones that respond to red light, so their world appears blue, gray, and yellow. Reds and greens are impossible for cats to tell apart, so if you have bright red hair, it probably doesn’t stand out to your cat.

However, new research suggests that cats may be able to see some colors that humans can’t. A new study by researchers in London found that cats and some other mammals can see colors at the ultraviolet end of the spectrum — colors that humans can usually only see under a black light. Given that there are many things in our world that possess ultraviolet coloration, such as birds and flowers, the world a cat sees may be an incredibly vivid one!

Glowing or not, if you’re standing too far away from your cat, you may look like a big blur. Human eyes have muscles that allow them to change the shape of their lenses to focus on objects at different distances, but cats’ eyes lack those muscles, so they are stuck focusing on things between 6 and 20 inches away.

In other words, cats are colorblind, nearsighted, and probably see the world as if it is lit by a black light.

Do Cats See Us as Another Species?

Cats treat us as though they think we are giant, clumsy fellow cats. When a cat rubs up against you and lifts its tail, she is greeting you in the same way that she would greet another cat. Compare this to dogs, which play and communicate differently with other dogs than with humans, suggesting they recognize the difference.

Cat behavior researcher John Bradshaw of the University of Bristol says that cats probably see us as especially clumsy — which most of us are, by cat standards. However, despite legions of Internet memes, they do not see us as foolish inferiors. After all, in feline social circles, rubbing and purring are not how one greets a social inferior.

They may also see us as family. When a cat kneads you with her paws, she is treating you as a kitten treats its mother; kneading is a kitten’s way of asking for milk. On the other hand, if your cat tends to try to “groom” you, she might be treating you like a kitten!

Cats either can’t tell human faces apart or just don’t care what we look like. In 2005, researchers from the University of Texas at Dallas and Pennsylvania State University set up a test in which cats and dogs were trained in object and pattern discrimination. They were taught to choose between two images in order to receive a treat. When shown pictures of their own handler’s face and a stranger’s face, the cats only recognized the handler’s face about half of the time.

In the same study, the cats were shown images of the face of a familiar cat and a strange cat, and they selected the familiar cat’s face 90.7 percent of the time. The cats chose an image of a familiar outdoor setting over an unfamiliar outdoor setting 85.8 percent of the time. Clearly, cats are good at visual recognition — except when it comes to human faces.

Instead of facial recognition, cats may use other cues, like our scent, the way we feel, or the sound of our voices to identify us. Researchers from Tokyo University found that cats do recognize their owners’ voices. In 2013, scientists played recordings of the cats’ names being called by their owners and by total strangers; the cats reacted most strongly to their owners’ voices.

On the other hand, in these studies cats didn’t actually move from their napping spots for anyone — familiar or not. The researchers concluded that cats simply are not inclined to respond to calls from their owners when their owners are out of sight. Many cat owners, however, report that their own cats are much more inclined to respond when they expect to be fed or let into the house.

The reason for this is that cats entered human society more or less on their own terms. They moved into human villages about 9,000 years ago, chasing rats that had also come to town to pillage stored grain. People eventually took cats into their homes, but with much less behavioral conditioning than occurred with dogs several thousand years earlier. As a result, Tokyo researchers said, “[Cats] seem to take the initiative in human-cat interaction.”

Researchers also talked to cat and dog owners and found that both sets of owners were equally attached to their pets. No matter how they see us, we definitely love our cats for their unique view of the world, their distinctly feline affection, and their undeniable independence.